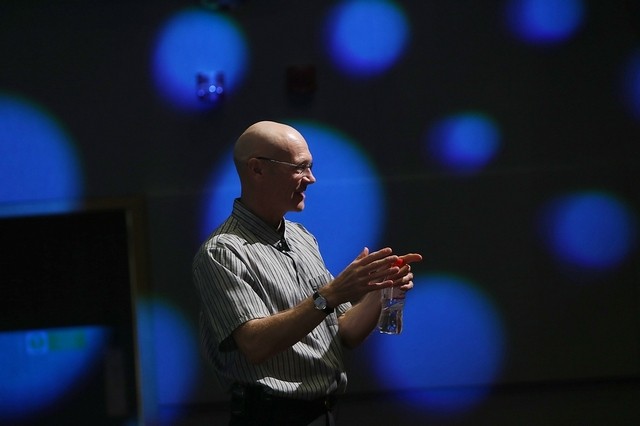 A personal finance article written for The National. This took a lot of work – not only attending the event but speaking to a dozen investors and several financial experts and do a fair bit of Excel number-crunching.

Trying to be a sensible expat, Matthew Miller set up two long-term savings accounts in lieu of a pension soon after arriving in the UAE. By the time he pulled out of the plans three years ago, he had lost US$45,000 in locked-in fees and commissions.

In 2014, having paid in a total of around $140,000, he felt “sick to his stomach” when he realised his savings were not growing. Crunching the numbers, he realised fees were wiping out profits and decided to shut down the plans early.

Mr Miller was spurred on to change his savings ethos by the book Millionaire Teacher: The Nine Rules of Wealth You Should Have Learned in School, written by Andrew Hallam.

A fellow Canadian, author Hallam, who has also written The Global Expatriate’s Guide to Investing, is a teacher himself, and worked in Singapore for 11 years. He turned his frugal ways and prudent savings into $1 million before he turned 40 and is now on a crusade to help other expats.

Hallam, 46, left Singapore and his job in 2014 and is now in his third year of travelling with his American wife Pele. While he may return to teaching one day, he says, he no longer needs to work: he can live off his investment portfolio.

I don’t want you to believe what I’m saying: I want you to question it. It’s important for everyone to do their own maths.

Yet he has spent this year on an unpaid tour of the Middle East, South East Asia and parts of Africa, giving seminars on investment and how not to get caught out by fixed-term investment plans with inbuilt commissions and high fees like Mr Miller. Since January he has delivered 82 talks in 11 countries in his bid to “stop the spread of financial malaria”.

Hallam says he believes the long-term savings and investment plans sold in the UAE are “the most expensive financial products available anywhere in the world” and he hopes that his tour of the region could cumulatively save people in the UAE, Egypt, Kuwait, Jordan and further afield tens of millions of dollars.

“We don’t learn financial literacy in school, so people are afraid,” he says. “I present financial education. I don’t want you to believe what I’m saying: I want you to question it. It’s important for everyone to do their own maths.

“Going with compensation-based schemes is not good. There is a far greater conflict of interest because people get you into schemes that just pay them more money. Payment-based financial advice follows more of a fiduciary principle and is a partnership over time; there is no windfall. Commission-based, particularly in the Middle East, can become exploitation.”

* This is an excerpt of the full article written for The National.

It is “this easy” to invest, he says.

Investing $25,000 and assuming an eight per cent stock and bond market average, Andrew Hallam details what you could expect in returns over three to four decades if you were paying a low fee of 0.5 per cent versus a managed fund fee of four per cent – which is common in the UAE. You could expect to make more than three times as much in 35 years – and more than fivefold the same return in 45.

Should you ditch your expensive investment?

If you have a fixed-term savings account with an early redemption penalty, is it worth leaving?

Mr Hallam uses Moneychimp.com’s compound interest calculator to highlight what would happen if you left a fixed-term savings plan today. Assuming a $100,000 portfolio with an early redemption penalty of $30,000, what would happen over the next 20 years if you earned eight per cent in a fund with low fees or 4.5 per cent on a managed account with 3.5 per cent after fees.

Any cookies that may not be particularly necessary for the website to function and is used specifically to collect user personal data via analytics, ads, other embedded contents are termed as non-necessary cookies. It is mandatory to procure user consent prior to running these cookies.